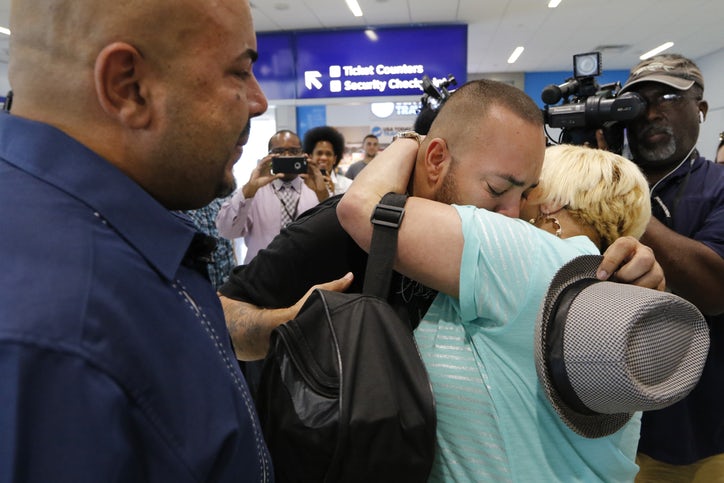 That’s how some people describe the birth parent reunion of an adopted or foster child/teen/adult.

Some say it is impossible to prepare for such an onslaught of emotions.

As an adoptee veteran , I beg to differ.

We can prepare ourselves.

Here are four things we can do as foster/adopted kids, teens, and adults to prepare ourselves for reunions:

2.  Remember you might remind her of your birth father. I often have wondered how my mother could completely change at the point of reunion from prior acceptance and love to rage-filled rejection.

Looking back, I believe when she saw me in person, I reminded her of my birth father, who raped her.

Be aware that if your birth parent hasn’t had help with her own painful life, she may project her unfinished pain on you.

3. Remember you’re not at the mercy of anyone. In recovering from adoption trauma, there probably was a point when your rage felt uncontrollable while considering you had no control over who your parents would be.

I’m giving you some tough love, here, dear ones.

What do you think when you read the words “at the mercy of others?” Does your anger flare, like a wild fire? “If it wouldn’t have been for my birth mother (her disappearing after I was born, her drug use, her cruel ways, her druggie behavior), I would be normal. I wouldn’t have been placed for adoption.

I remember a time when one of my counselors gave me the assignment of visiting a local nursery and the babies there and trying to discover what I lost when my birthmother disappeared from my life immediately after  birth.

A nurse friend and I gowned up and went to the nursery she worked in. What impressed me was the innocence and  total their dependence. I concluded they were clearly were at the mercy of circumstances and people. Later on I pinned these words:

Oh little baby, so soft and pure. How sweet and precious you are. How could anyone give you away? How can anyone act like you don’t exist? There you are – so tiny and helpless. Lying there in that incubator. Isolated and cut off from all human touch. Only a bottle to feed you. There is no one for you. Oh, little baby. I feel so sorry for you. How could anyone forget about you? You’re so beautiful, so precious. No one to protect you. No one to care for you. No one to sing lullabies to you.

You have no idea that you will be terrified of abandonment and rejection and that you will prefer isolation to people. You just sleep on, as if there is not I care for you in the world.

I wrote these words before I ever met my birth mother years ago. Talk about being at the mercy of others.

At this point, you may be yelling…BUT! YOU DON’T KNOW WHAT AWFUL THINGS I’VE BEEN THROUGH.

No, I don’t. But I do know someone who was abandoned and abused in the worst of ways. His name was Joseph of the Bible…you know, they guy in whose Dad gave him the coat of many colors? Not only did his jealous brothers put him in a deep well and abandon him, not only did they sell him as a slave, and not only did they lie to their grieving father about his disappearance…yet, Joseph prospered. Why? He chose to constantly look up, trusting God was in control in the midst of abandonment and pain.

So, even though my beliefs and emotions and brain waves told me that I was abandoned in a cruel way, God was there, and He has been with you also, every breath of the way. Psalm139:16 says that “He has planned everyday of our lives before any one of them ever came to be.”

So, are you and I at the mercy of a cruel God who takes babies away from their mothers? Absolutely not! You may not be able to see His providence and goodness with eyes of faith yet, but He has never taken His eyes off you. He loves you dearly and wants the very best for you.

Look up! There is another realm of life beyond this life that we can only see through faith and by reading Scripture. (try reading a Psalm and Proverb a day…corresponding with the day of the month).

How does the victim feel about himself? Does he believe himself worthy of success, acceptance, and well-being? Far from it. The victim mindset says, ” I am a loser. I’m worthy only of rejection. Therefore, I will set the stage for it and make it happen before others have an opportunity to reject and hurt me.”

Todd, age 29, does this in his relationship with women. He says that he tests to see if they will leave him by saying how much they will take of this passive aggressive behavior. But here’s the clincher. He says, “The end result is always the sameIt feels like I am unworthy and being rejected and in realityI give them no choice but to leave.”

Beverly says that she also tells people to see if there really like her. But she says that they always fail, which builds up resentments about the failures of people she loves and consequently distances herself from.

She says, “Instead of waiting to be rejected, I will most likely do something outrageous so that the other person will reject me.”

5. Remember you can choose to be your own best friend.

Self intervention is possible. Spencer Johnson, M.D., said that one of his clients said this–”Sometimes I start feeling like I’m not getting a fair shake. Usually it’s over something small. I still don’t like it very much when I feel I’m not being treated well. As soon as I stop and see that I’m feeling like a victim, I know who my persecutor is. Myself. Soon I’ll remember that I can either be my best friend or my worst enemy. It all depends on what I choose to think and choose to do

I, Sherrie, chose self-intervention for my thinking thinking when I heard the late Betty Jean Lifton encourage participants at the American adoption Congress to write a letter to the victim the part of themselves.

Dear victory be part of me , I’ve used you long enough. You know longer have to be loyal to those who hurt you. You can speak up. You can say it like it is. You no longer have to be the good girl. I’m calling you to grow to maturity. No longer give people power over you. Others have nothing more than you do. Don’t let them take your power away. Don’t let them tell you what to do. Tell them how you feel when they play God in your life and tell you what to do. I’m not healing journey and because of that I feel less like a victim.”

Dear one, right now you might be distressed by the gush of what your mind has been thinking all these years…and you may feel further victimized.

Often we need to be overwhelmed before we’re ready to grow.

(This post is drawn from my book: 20 Life-Transforming Choices Adoptees Need to Make. This would be a great gift book for the adoptee and foster child in your life.) You may purchase on my author page on amazon.com https://www.amazon.com/Sherrie-Eldridge/e/B001H6IXQY/ref=dp_byline_cont_book_1 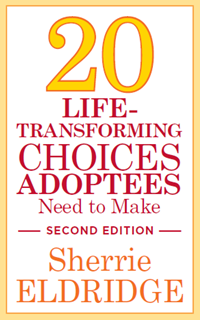 Use this book as a post-adoption resource for adoptees. Chapters are named specifically about common problems, so you can read as needed.