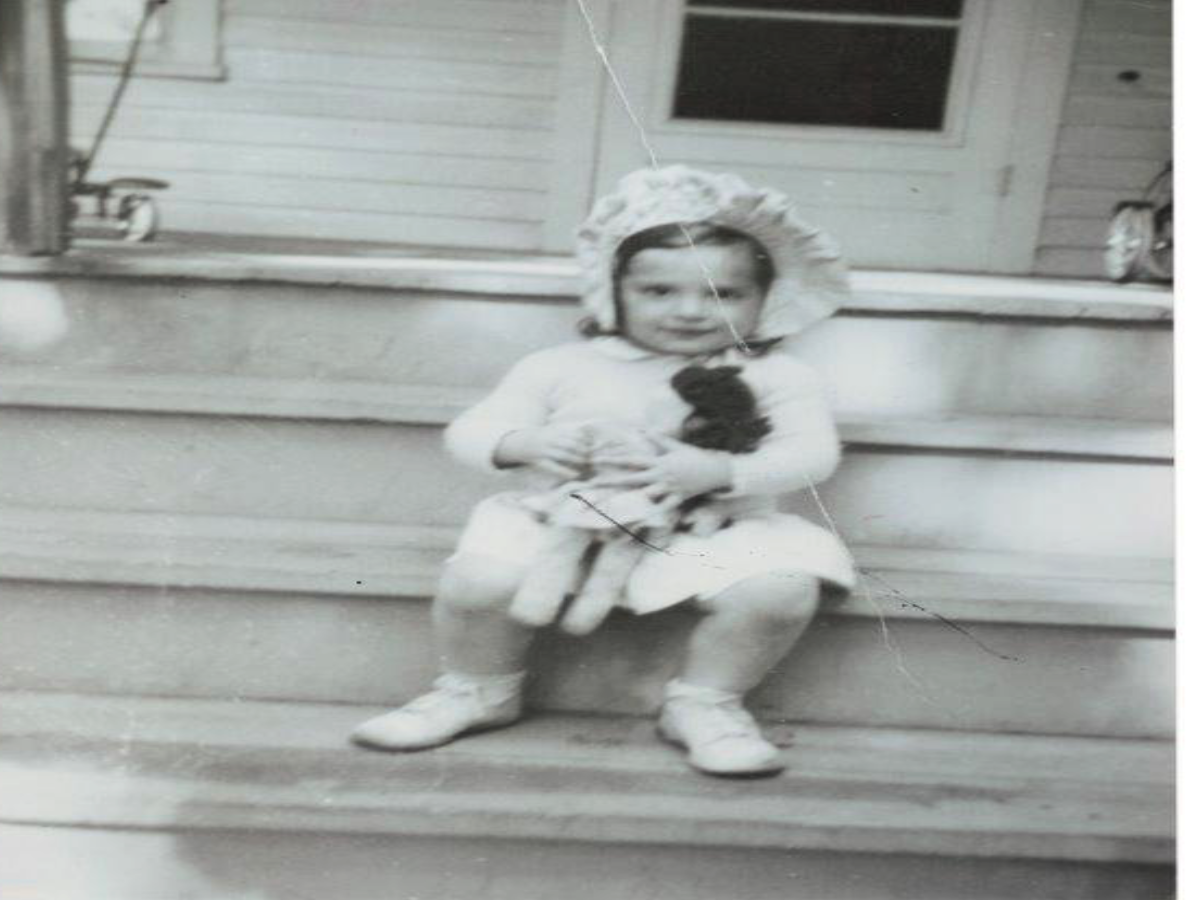 Imagine being given an assignment to find someone you’ve never met, but someone with whom you have an unknown connection.

The person you’re searching for is a female toddler who lives in a bungalow on a prestigious, tree-lined street. She’ll be sitting on the porch steps alone.

“Who’s that little girl, anyway?” you may ask yourself. Why am I searching for her?

There are mysteries surrounding this child that you must solve, even if it takes decades.

Mysteries such as the soldier who walked by her house daily, peering in, like he’s searching for someone. Or, the superintendent of records who kept her hospital records sealed permanently.

There is much shame and pain that this child endured before being adopted. When you solve the mysteries, her life will transform from being nameless to shameless.

Beneath the complexities surrounding her birth were threads of the divine that were always present, but not visible. Always in the details, but no one would remember. Always faithful, but not obvious.

Don’t worry, my friend. You’ll know this child the moment you see her. She’ll be donned in a pink collared dress, a ruffled bonnet, well-worn white high-top leather shoes, and saggy lace stockings.

The clincher is that she’ll be holding her rag doll close to her heart. Embed that scene in your long-term memory, for the doll is the key for unlocking the message of comfort that you’ll communicate when the child becomes an adult.

You must be aware that she’s not the biological child of her parents, Retha and Mike, who adopted her ten days after birth. You must also know that she was a failure-to- thrive baby with special emotional and physical needs, such as sensory and learning issues.

Early in life, her parents told her she was adopted.  As an adult, this child remembered hearing her story for the first time on the dark green French-knotted couch in the living room.

Sharon was the name they chose, with the middle name of Lee, after her adoptive grandmother named Leah.  Little did her parents know that this  Biblical name would take on significance later in life.

Leah was a bucksome, high-spirited social worker for the county, who single-handedly operated the County Children’s home. Abandoned and abused children hoped to find refuge there.

No one could have ever imagined that the friendships Sharon experienced in this County Children’s Home would prepare her for her life’s work in the field of adoption and foster care.

Could That Little Girl Be My Patient?

When a county physician contacted Leah about the possibility of helping a distraught pregnant woman named Marjorie, she agreed.

Marjorie wanted nothing more than to put the unplanned pregnancy behind her. This certainly would be a closed chapter and a wise move toward saving her marriage. If her husband found out she was carrying a baby that wasn’t his, he’d insist on abortion.

The next day, Leah consulted with the physician and Marjorie, a beautiful, dark-haired woman in her early twenties. Within 30 short minutes, she claimed rape by a stranger, and refused to reveal the man’s identity.

There would be absolutely no contact with the baby after delivery- no verbal comunication of the baby’s sex and total privacy about her hospital stay.

When labor began, Marjorie contacted Leah and the physician, who met her at the hospital. After the last push, Marjorie was drugged and wheeled away, never to be reminded of her baby again, or so she thought.

The daughter she left behind felt something warm dripping on her newborn chest. Something wet. Something comforting. Something sacred. It was the physician’s tears.

No one would know this until many years later when the physician’s granddaughter revealed that he wept at the birth of every baby he delivered, and that he was an orphan himself.

Years later, the baby, now grown, would write about those tears.

Warm tears landed on my newborn body, like a spring rain.

I wanted to feel them forever.

To my once-orphaned delivery doctor, life was something to be celebrated, to shed happy tears over.

I couldn’t wait to feel his tears again.

What was it about those tears that soaked into my soul?

Were they saturated with hope and comfort? Were they bright lights at the end of the traumatic tunnel of living my first nine months of life in the womb of a mother who fantasized abortion? Or, were they seeds, planted in secret to produce a great harvest later in life?

Whatever it was, I wanted more.

Orphan doctor held me up, gazed into my big brown eyes, and smiled.

My five-pound body relaxed in his big, soft hands, like a hammock on a summer’s day. I wanted to stay there forever and gaze at the clouds.

But then, the nurse bent close to the orphan-doctor’s ear and whispered something.

What did she whisper?

Was there something wrong with me?

Was I too little?

Is that why she suddenly whisked me off to a dimly-lit room where pleading and  plaintiff  newborn cries hovered, like smog in LA?

Where were those large, gentle hands that first touched my five-pound body?

Where were the warm tears that celebrated my life and birth?

Where was the orphan doctor, who welcomed me to planet earth with tears?

Then, the nurse shoved me into a box of glass. I kicked and screamed bloody murder.

I cried and cried, but the sounds bounced back, like ping pong balls.

Where is the orphan doctor?

Why doesn’t he come?

And, so I give up and go inside. It’s safe there.

Thus, the orphan doctor wouldn’t appear again in the hospital, but stopped by every week for a year to see how Baby Sharon was doing.

Could That Little Girl Be My Granddaughter?

After saying goodbye to Marjorie at the hospital, Leah wondered, “Who’s that little girl, anyway?” Who’s this precious little life that hasn’t even been given a name?

There was something about this newborn that convinced Leah she was going to be her grandmother. Her dark hair, her olive skin, her tinyness, her need for a family and a forever home.

The scene of the attending nurse wrapping the newborn in soft blankets and placing her in an incubator stressed Leah. And, when the nurse placed a sign that said, “Baby X”, she couldn’t hold the tears back.

Retha and Mike lived just a block from the hospital, so she drove her big black Buick onto their gravel driveway and eagerly knocked at the front door. As usual, she could see them run to meet her through the three little door windows.

With bated breath, she relayed the story about the precious newborn that needed parents and a home.

Could That Little Girl  Be Me?

Now, I’m going to reveal my total weirdness to you. It may sound way out to you, and that’s fine. It may have innuendos of “inner child” work which I’ve deemed ridiculous for years. Or, it may help you to see the healing process of one adopted adult.

You see, friend, right there in my closet when choosing clothes for the day, I saw something strange. There was a mother and daughter standing off to my left. The mother wasn’t moving, but the pathetic-looking child next to her couldn’t stop wiping the never-ending snot from her nose.

Drawing my chin to my chest and breathing deeply,  I concluded, “What an ugly kid. I’m sure glad she’s not in my life.”

Then, I tried to process the weird experience. Could  the mom be my mom? Nope, no resemblance. Okay, was I the mom? Not a chance, for, my two daughters were never disheveled.

Does that mean I’m that disgusting child? Could I really be that child?

And then, just like a megaphone, I heard, “Will you parent her?”

How repugnant. I felt nothing but aversion for this child. and even if she were the Moses of modern day floating in a basket on the Nile, I’d let the alligators eat her for lunch.

But, could this be my calling to parent this child? If it’s my calling, I don’t want it, nor her.

And, who exactly is this child?

Deep inside, I am.

And the rag doll?

Why am I holding it close to my heart?

Because the rag dolly got left behind.

She needs a new mommy and I will be her mommy.